A news story nearly a week ago in The Times Of India claims that Manali-Leh has closed officially for the winter . And that it does so every year on October 15th.

1. Every year , October 15th : this is easily debunked by reading what Times of India has written themselves earlier  . Prime example from 2011 :

MANALI: The Border Roads Organization (BRO) has decided to keep the strategically-important Manali-Leh highway open till November 30 this year. Earlier, the highway used to be closed officially after October 31 every year.

2. Official source : the first hand source here would be the Border Roads Organisation , which is responsible for keeping the road open. BRO isn’t mentioned , and their website doesn’t do updates on road status. The official Leh site has a roadmarker , and it shows both roads as open. The source quoted in the TOI story is a police official saying that the Sarchu check post has been abandoned . This is à bit odd , since it’s a Lahauli policeman talking about Sarchu : not only a different district , but a different state ( Himachal Pradesh vs Jammu & Kashmir ) .

3. Is the road actually blocked ? Neither the policeman or the journalist suggest this. They talk of possible imminent snowfall.

4. The Rohtang La pass receives the brunt of the snowfall , closes first, and is still  very much open . First light snowfall was on the 12th , now long gone : nights barely below zero at the top , and nearly ten degrees plus daytime. Open road both to Keylong and ( over the Kunzum La ) Kaza according to Keylong admin.

In in one or two years there will be a different dynamic after the opening of the Rohtang tunnel , bypassing the actual pass.

Updates in the news sticky on top ( http://korta.nu/sticky )

Todays hindi expression : chakka jam . A sit down protest – with cars. Manali has come to a near stand still as the National Green Tribunal actually almost stod it’s ground on the issue of banning diesel traffic up to the Rohtang La pass. In the end the long forewarned decision was transformed in to a cap on the total number of vehicles , and a heavy tax on diesel vehicles. Little love was won by this compromise.

The stakeholders in the conflict , with or without active advocates :

* the Rohtang La biotope , crossed by the “Great White Snake ” : Thousands of  four wheel drive cars , leaving a trail ..less than white behind them . Pristine white snow in beginning of the season turns more and more in to something resembling the floor of a oil pit in a auto shop.

* the Manali taxi drivers , who rightly remarks that paying five thousand rupees won’t make the vehicle less of a burden for the environment.

* the day tourists , many of whom have the chance of ” touching the snow” at the Rohtang as a key driving factor for coming to Manali . And now , when even the weather gods have been conspiring against them , found out yesterday that they can’t even come up to the snow line : the road always closes on Tuesdays so that Border Roads can do some effective road work. Right now the road past Marhi at 3000 meters is basically a one lane tunnel in the snow – see the photo in the sticky above.

* the Lahaulis on the other side of the pass , waiting for the first fresh veggies and provisions in months since the road closed for the winter .

* the military , who hardly needs any advocates : the Manali-Leh road probably shouldn’t even exist without the backdrop of the Aksai Chin war and the tension between India and Pakistan. At least not as early as as in 80’s.

Short term there are only two winners at the moment : the Lahaulis have a chance of seeing the road not being one of the slowest roads in India ( often five hours or more for the fifty-ish klicks from Manali to Rohtang top) in peak season. The other winners are the tourists who choose to stay and take the tour buses … until the taxi drivers block them as well.

Long term the needs of the Army and locals will be solved by the Rohtang tunnel , but that’s years off still. The tunnel won’t make any real dent in the heavy traffic over the actual pass though , except in eliminating the heavy traffic nowadays the first week(s) after the spring opening.

The mid term solution is more people in less vehicles , i.e. ( clean , CNG ) buses. Like the HRTC buses plying the full Manali-Leh road these need to be custom made : bigger than the minibuses , but still with short enough wheelbase to navigate the hairpin curves.

The really bold move here would be going for a cable car ( rope way , as the Indians put it) . This would the litterally long term solution , since it would make Rohtang La a round the year safe attraction ,like the Jade Dragon.

And yes , there is a common denominator here : the taxi drivers will suffer horribly. Sometimes everyone can’t win . Maybe this conflict will be a preparation for Delhiites in what must come at home as well : Delhi has one of the best Metros in the world – and this isn’t enough. It also has some of the foulest air in India ( and Asia , worse than Beijing ) , and this won’t change until the traffic situation changes drastically there as well.

Srinagar-Leh will open tomorrow , according to The Tribune.  This may  actually happen, since the BRO road crew was a few klicks from the Zoji  La pass a week ago. There is still a conspicuous  lack of details though. Weather forecast says says rain five out of six coming days in Srinagar , thinning out towards to Kargil and Leh , night temperature just under zero , so more snow is definitely possible .

No mentions of the the earlier bold BRO claim that the road would be thrown open  on March 31 – but still good chances of  this becoming the earliest opening of the road in more than a decade , the former record was April 15th in 2008 . That turned out mildly chaotic.

The timeline for clearing the roads to Leh :

Srinagar-Leh : first the road will be cleared up to Sonmarg ( this year March 16th  ) , then the Zoji La will be almost cleared and the first loads of fresh supplies will come in to Leh …with donkeys ( last days in March , this year ) .A few cabs will get in before the road is officially thrown open. Lastly the roadmarker at  the LAHDC  site will show open when the road is deemed fit for all vehicles , i.e. busworthy.

Manali-Leh : first there will be rumors , like this years classic when some Indian media claimed that the whole road would be cleared by April 15th. Clearing the road starts in March , with three BRO groups working at the same time : two crews working from south ( Manali ) and north ( Koksar ) end towards the Rohtang La , and the third crew working going past Darcha towards Baralacha La and the 5000+ passes beyond that . Once the Rohtang has been cleared ( BRO´s goal at present : mid-April ) all groups will unite  in the push towards Leh. There may or may not be a period ( like in 2011) when the road is declared officially open , but not for buses : ” Open For LMV” , i.e. Light Motor Vehicles , including minibuses. Last of all the Rohtang will open for the daytrippers from Manali. This year the plan is introduce one way traffic , up only in the morning hours , down in the afternoon.

Srinagar-Leh and Manali-Leh are military priorities , and get a lot of resources. The NH 22 route , Shimla-Spiti over the Kunzum La will open later than Manali-Leh , and the road over Saach Pass even later.

Cloudburst in epic proportions taking out bailey bridges , a school , the life of a Manali resident and tossing boulders and vehicles downstream Beas river yesterday.The road the southern  port of the Solang tunnel work beyond repair for the coming weeks. Manali-Leh out in five different places . Heavy rainfall for the coming two days in forecasts.

UPDATE , August 8th . That was fast :Traffic now running ( despite BRO´s first comment it would take “at least a week” to get it back in full order) to Keylong & Kaza. Moderate rain four out of five coming days.

…and a farewell to the old familiar roadmarker at leh.nic.in : five hours later the old version of  the site still not updated. Get used to the new minimalist look.

See the recent photo posts and the Inroads 2012 post for details up to now. 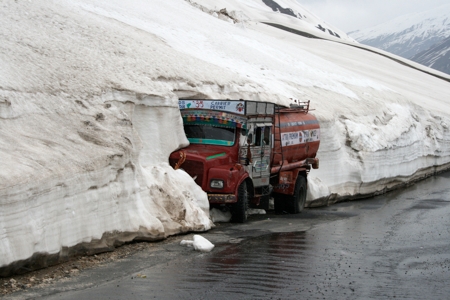 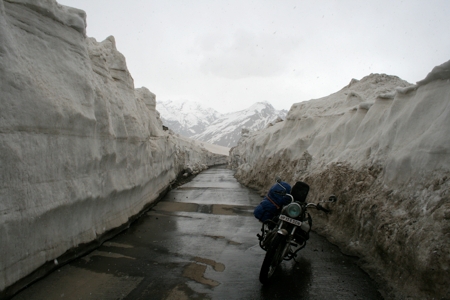 Thanx , raftinkiwi , one of the first to ride from Leh to Manali this year. 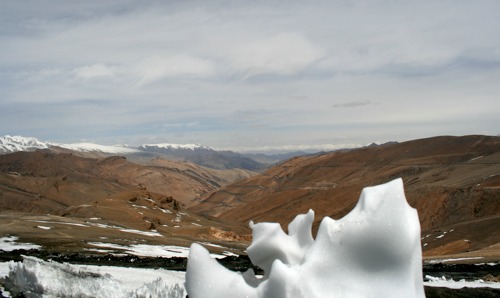 Photo from Gregor, one of the first to ride down to Manali from Leh this year. Keep ém coming , raftinkiwi !

Manali-Leh status
June 1st : Officially open at leh.nic.in
May 24th : first bikers and cabs make it down to Manali – see separate photo posts below
May 1st : from Keylong admin : open road over the Rohtang to Manali.Some taxis have started to cross , the daytrippers are being held back … and one very solid report , May 12th, of the first taxi reaching Darcha from Leh : official opening should come very soon.Light snowfall over the Rohtang & Baralacha La May 13th.

April 26th : taxis made their first try to cross the Rohtang La  , which was aborted due to an avalanche clipping the road at Rani Nallah. Bulldozers from both the Marhi (south) and Koksar (north) end  have met on the top of the pass. Confirmed  by the BRO April 26th.Road still closed at Marhi.

Kargil-Padum road open , confirmed by Kargil admin. Private buses to start on the 25th according to The Tribune.

Official on leh.nic.in today : the road is closed.

Last supplies for the winter are being stocked up in Ladakh , and the first rumors of closed roads : Manali-Leh is not  closed , and HRTC buses are running.

“Maintenance of the highway shall go on in winters, and we shall get the stretch cleaned in case of mild snow.” – to quote BRO. The  road may not be cleared in case of heavy snowfall.